A "Fusor" is a term coined by the inventor Professor Philo T. Farnsworth. The term means a device that is capable of creating sustained nuclear fusion. 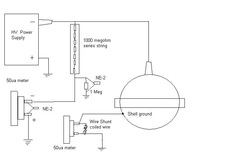 For my personal project I will be creating a Farnsworth style fusor. This fusor will be using Deuterium Gas which is also known as heavy hydrogen. It is called that because essentially it is hydrogen except with a extra neutron.

I am going to break my system up into six major parts.

Chamber
There are two parts of the chamber - the inner grid and the outer chamber.
The chamber I will be making out of 316 stainless steel with a diameter of eight inches. There will be six to eight holes in the sphere which I will be using to attach different apparatuses. The inner grid will be a sphere made up of four circles of tungsten wire measuring two inches in diameter which will be connected to the high voltage  negative power supply through one of the holes with a vacuum tight feed through to secure it in place while allowing no leak.

Gas System
For my gas system I will be using heavy hydrogen or Deuterium gas. I will be using all SS connections and piping. I am going to start with a compressed SS container of D2, and firstly putting it into a hydrogen regulator which will be the first rough flow regulator after that there will be a micron filter, MFC which is a electronic tool to precisely restrict to flow to exactly what I need and finally a capillary.

Viewing system
I am going to use the view port which will have a video camera attached to it. I will then be attaching a video camera to a TV to help view inside the chamber without the danger of x-rays or radiation sickness.

High Voltage System
I have decided to use a H.V. system that can produce 100 kilo-volts to produce the needed voltage. I will be using a low current high voltage DC (direct current) which you use in your car (AC or alternating current is normally used in the house). For this fusor I will be using a negative charge though the inner grid and attaching the positive to the chamber. I will be using this system that is shown in the picture (made by R. Hull from www.fusor.net). I am looking at a x-ray machine with a variac (variable auto-transformer) which produces the kind of electricity that I am going to be using in my fusor.

Detection
The only true way to prove that I have achieved fusion is by getting a reading of radiation. For this I will be using two different devices.
1) Geiger Counter - Most people have heard of this device. It is used to measure ionizing radiation in the forms of alpha, beta, and gamma radiation. I will only be using it to measure gamma because it only produces gamma and neutron radiation.
2) BTI Bubble Detection - This is a very specific device used to detect and measure neutron emission through ionizing radiation. This is essential in proving that deuterium fused and released neutrons in the process. Further explained here - http://hyperphysics.phy-astr.gsu.edu/hbase/nucene/fusion.html.

On this diagram below I forgot one more reaction, D + D = 4He + Gamma radiation. This reaction is extremely rare and only occurs in about one in ten thousand fusions and can be almost non existent.